Sculptor, painter, engraver, and illustrator, Paul Jouve was born in 1878 in Bourron-Marlotte in Seine et Marne. His father, Auguste Jouve, himself a landscape and portrait painter, passionate about photography and a close friend of Theo and Vincent Van Gogh, won a gold medal at the Exposition Universelle in Paris in 1899. Soon, the family left Marlotte and settled in Paris, boulevard Saint-Jacques. Observing the drawings of his cat «Fina», whom her son kept pencilling, he encourages him. He regularly takes him to the Jardin des Plantes to discover other animals. The young man’s artistic ambitions are confirmed and he trains himself in lithography techniques in Henri Patrice Dillon’s workshop.  While he has very little interest in academic education, he prefers to observe and draw animals from nature.

Jouve is only sixteen years old when he first participates in the Salon des artistes français, as a student of his father. He already expresses a fascination for animals and exhibits there two drawings: Lions de Menelik and Lions d’Abyssinie. In these striking works, the artist seems to glimpse and capture the souls of the wild animals. Subsequently, Jouve participates regularly in this exhibition.

As part of the Exposition Universelle in 1900, Jouve - only twenty-two years old - is commissioned by the architect René Binet to create a hundred meter long bas-relief frieze to decorate the pilasters of the main gate, along with a cock ornamenting the arch of light and four lions opening onto the avenue of the palais des beaux-arts. Created by Alexandre Bigot, this monumental frieze representing lions, tigers, mouflons, bulls and bears is made of flamed and enamelled greenish-brown stoneware. Its reception is such that bas-reliefs are then commercialized. The subjects are also reproduced in a smaller. Jouve’s bright future is shaping up.

The following year, the gallery owner Samuel Bing, who introduces Japonism at the end of the 19th century, takes him under his wing. In his gallery, Jouve exhibits sculptures, drawings, paintings, prints and decorative objects. All of them are very much appreciated by art collectors. Thanks to the financial support of this collaboration, the artist can travel and discover the zoos of Hamburg and Antwerp, where animals are no longer confined in cages as in the Jardin des Plantes. In Antwerp, he meets Rembrandt Bugatti. Paul Jouve is also fascinated by the animality of birds of prey and wild animals which progressively lead him to abandon «domestic» animals.

In 1905, Marcel Bing, Samuel’s son, organizes Jouve’s first solo exhibition with sixty-four of his works. That same year, the artist is commissioned by the Société du livre Contemporain to illustrate what will eventually become a best-seller: The Jungle Book, written by Rudyard Kipling. In this project, Paul Jouve’s talent gleams. His sculpted drawings emerge from the pages like evidence. The artist instinctively captures the energy, the essence of this story at the heart of animal nature.

Paul Jouve also exhibits his sculptures at the Salon de la Société Nationale des Beaux-Arts. In multidisciplinarity, the artist finds his way. The sculptor guides the painter and draws the form animated by the spontaneity of the illustrator.

In 1907, Jouve receives a 2-year grant, awarded by the general government of Algeria, the «Orientalist grant». He is the first resident of Villa Abdel-tif, with Léon Cauvy. He comes back to France after a few months. He visits Algeria three times between 1907 and 1909.  In Algiers, he meets his wife Anette Noiré, daughter of Maxime Noiré, an Orientalist painter. From these new friendships, new discoveries emerge along with new undeniable influences, nurtured by the burning warmth of these indomitable territories. Henceforth, a different light sets the rhythm of his compositions, which more willingly focus on architecture, vegetation and customs.

Jouve regularly exhibits sculptures and paintings at important Parisian events. Artistic recognition comes quickly. In 1911 he settles in the former studio of the painter Jean-Léon Gérome.

Mobilized in August 1914, Paul Jouve leaves for the northern front and draws the daily life of the «poilus». The colonel commanding the brigade notices his drawings and shows them to General Quinquandon, who assigns him to his area as a mail officer, which allows him to move around and draw. With a recommendation from General Quinquandon, he leaves with the Eastern army in October 1915. In Salonika, he finds his friend Gaston Suisse, whom he had met at the Jardin des Plantes. Jouve is in the army’s photography service. He can freely draw and paint. He organizes exhibitions among which a famous one in Athens - the Exhibition of Oriental Artists. Back in Paris, Jouve is a renowned artist. He is not only known within artistic circles but also to the public thanks to the Jungle Book late release in 1920. He receives the Legion of Honour that same year.

Insatiable voyager, Jouve travels to Indochina, China, Ceylon, and India. Enchanted by Angkor and the bestiality of its lush vegetation trying to regain control over man’s hand, he stays there for nearly three months in 1922. A fascinating ratio of power between architecture and nature leaves a lasting mark on his works, which is once again praised by the critique.

Seduced by the quietness of the south of France, he builds a house at Le Tholonet near Aix en Provence, in a very typical Art Deco style, in which he stays regularly until the 1950s.

In 1925 he exhibits in many pavilions at the prestigious Exposition Internationale des Arts Décoratifs and obtains the gold medal. He begins illustrating the Fables de La Fontaine along with Paradis Terrestres by Colette, Poemes Barbares by Leconte de Lisle, Kaa’s Hunting by Rudyard Kipling and Le pèlerin d’Angkor by Pierre Loti.

In 1931, Jouve undertakes a new journey through Africa for several months. He exhibits at the Exposition Coloniale Internationale de Paris and wins once again the gold medal. The cover of the exhibition’s book reproduces one of his works, an elephant and its mahout.

During his stay in Egypt in 1934, he discovers the Cairo zoo. There, Gazelles, antelopes, java-hair tigers, black panthers and polar bears fascinate him. A new large show closes this trip triumphantly.

The Normandie boat is constructed in 1935. For this important project, Paul Jouve is responsible for the wall decoration of the correspondence and reading room of the liner. Depicting a clear Art Deco style, two monumental paintings, set in the arched walls - Tigres royaux and Éléphants sacrés de Hué - respond to Nelson’s décor, with a chandelier by Jean Perzel in the centre.

In 1937, Paul Jouve receives the gold medal at the Exposition Internationale des Arts et Techniques, exhibiting among other things the monumental gilded bronze bull’s head, which can still be seen on the esplanade of the Trocadero.

In 1945 Paul Jouve is appointed a member of the Académie des Beaux-Arts (Academy of Fine Arts). His recognition is well established. However, he keeps visiting the place of his first loves:  the Jardin des Plantes. Two years later, he signs a contract with the publisher Maxime Cottet Dumoulin to illustrate Une passion dans le désert by Balzac, released in 1948. With a print run of 123 copies, this book is another success.

The artist continues his relentless travels, constantly in search of fertile land, nourishing his works with new discoveries. He exhibits in Morocco, goes to the United States and to Bermuda, which inspires a screen entitled Poissons now in the Musée des Beaux Arts’s collection in Reims. 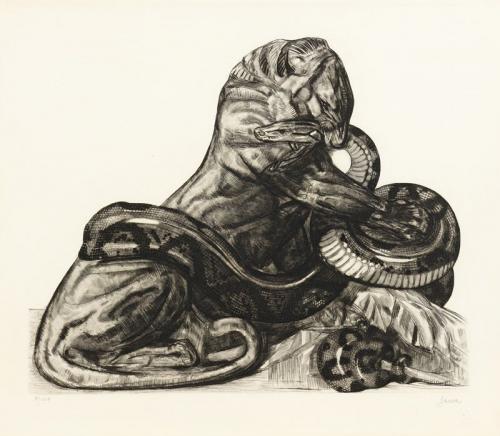 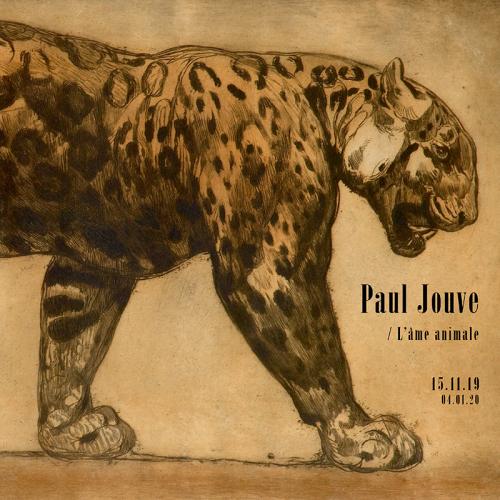 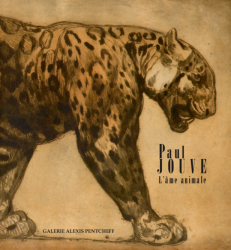