Charles-Édouard Jeanneret, known as Le Corbusier, was born on October 6, 1887, in La Chaux-de-Fonds in Switzerland. In 1900, he trains as an engraver-carver in the local art school and then joins in 1904 an interior design class taught by Charles L’Eplattenier who then influences him to become an architect.

Le Corbusier’s first artistic shock takes place in 1907, in a trip to Italy during which he discovers the Florence Charterhouse in Galluzzo and declares « I thought I could never see such a radiant interpretation of architecture [...] The harmonious organization of the individual and the collective is solved in joy, serenity and efficiency ». From this encounter, the artist develops a profound fascination for the generic space of the box, later illustrated by his theories on the «cell».

After travelling for a few years, Le Corbusier moves to Paris in 1917 and meets the painter Amédée Ozenfant in 1918 through Auguste Perret. The following year, they found the magazine Esprit Nouveau and develop several theories defining the purist art movement, which advocates for a harmonious aesthetic gained by the simplicity of geometrical forms. The first article dedicated to architecture is signed by Le Corbusier - a pseudonym that Charles-Edouard Jeanneret will keep throughout his career as an architect.

In 1922, he opens a studio rue de Sèvres in Paris with his cousin, the architect and furniture designer Pierre Jeanneret. From his articles, encounters and close friends, Le Corbusier imagines a new architectural vocabulary largely influenced by his obsessions with science and new technologies: «the machine for living» (the house), «the equipment of the house» (the furniture) and «the rest machine» (the seat).

The «Pavillon de l’Esprit Nouveau», prototype of a building-villas project, presented on the occasion of the International Exhibition of Decorative Arts in Paris in 1925, represents a genuine architectural manifesto in which the domestic organization is completely redefined. The idea of the living cell is here guided by the purist ideology and a furious desire to create a complete work of art. The former imposing wooden furniture is replaced by metal equip- ment, governed by functionality and space saving. Hence, Le Corbusier shakes up, provokes, defies the architectural traditions and establishes in 1927 the five points of modern architecture: pilotis, free plan, free facade, ribbon windows, roof garden.

That same year, the architect meets Charlotte Perriand who will settle in his studio until 1937. They present together with Pierre Jeanneret their first series of furniture, edited by Thonet Frères, at the Salon d’Automne in 1929. Considerably involved in the international art scene, Le Corbusier is in 1928 one of the founding members of the International Congress of Modern Architecture (CIAM for Congrés International d’Architecture Moderne). Between 1929 and 1945, the unstable political context in France and Europe generates multiple economic and social crises and therefore creates new urban concentration constraints.

While trying to solve these recent issues, the architect, designer and also painter reveals all his creative force in an innovative production, freeing himself from the purist dictates. From this, Le Corbusier unveils a more personal style, led by the idea of order, harmony and social utopia. At the end of the Second World War, the «Modulor» principle, resulting from several years of research on spatiality of the body and urban space, becomes the keystone of his work. Hence, a typical man of 1.83 m or 2.26 m with the arm raised defines Le Corbusier’s constructive harmony.

Through the line, one may read the morphogenesis of the form, governed by the spatial determination of the Modulor. With the notion of «corporality», sensory experiences emanate. The artist speaks in this sense of «acoustic» paintings whose spirituality is unveiled by the symphony of plastic elements. This language, invariably linked to the lexical field of music, is reminiscent of its family propensity for this form of expression.

Among Le Corbusier’s most notable buildings, the Villa Savoye (1928-1931) in Poissy remains one of the first testimonies of the two cousins radiant collaboration. The Cité Radieuse, built in Marseille in 1952 and commissioned by Raoul Dautry, is also a jewel of modern architecture within the Mediterranean landscape. The housing unit is based on the principle of harmonization between the individual and the collective, one of Le Corbusier’s recurring obsessions since his discovery of Florence Charthouse. The aim of this building is to provide individual well-being through the development of each rigorously integrated cell within a functional collective structure grounded in the idea of balance and social fulfilment.

The reorganization of Chandigarh (1951-1965) in India, commissioned by Nehru, is also one of the most ambitious projects of Le Corbusier and Pierre Jeanneret. The architect sees it as an «expression of the nation’s faith in the future». With this tremendous and ambitious urban work, he is finally able to apply his theories to an entire city. It is also the place where Le Corbusier defines the Open Hand’s concept - an ideological symbol, born from the Cold War context, by which a man gives and receives. It will be built eventually in 1985. 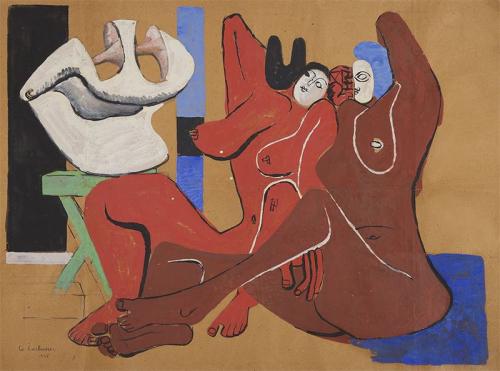