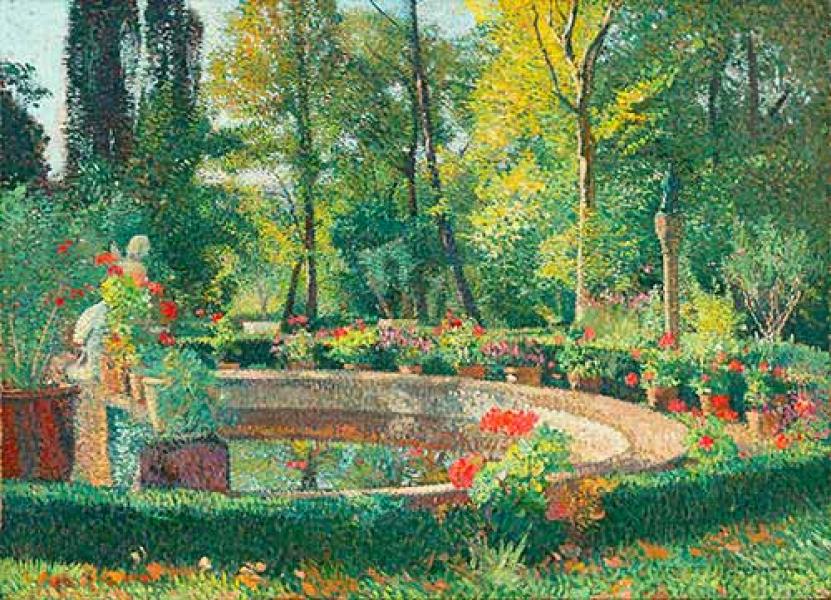 Attestation of inclusion in the archives used to elaborate the catalogue raisonné of Henri Martin issued by Marie-Anne Destrebecq-Martin.

"In 1899, Henri Martin acquired an old eighteenth-century building in the small village of Labastide-du-Vert, in the Lot, overlooking the valley.
With a pergola installed on a large terrace, the estate is spectacular: it includes a dovecote, several ponds, a vineyard, a group of cypress trees and is often represented by the artist.
Marquayrol was a summer residence, which Martin occupied from March to November: he therefore painted the exterior and the inhabitants going about their business.
In 1939, he made it his main residence.
Here, Martin depicts the geranium pond with a mythological statuette.
“After three months spent in the country, tête à tête with nature, he confided to the critic of La Dépêche, Bernard Marcel, around 1910, the full, bright and diffuse light, blurring the lines of the characters and the landscape, compelled me to translate it by the dotted line and the decomposition of the tone”.
He thus oriented his art towards divisionism. He creates his paintings according to the precepts of Paul Signac and Georges Seurat and divides his touch into multiple points.
The viewer's eye adapts and recreates the overall vision of the represented landscape.
Martin's skill consists in immersing the viewer in a vegetal tangle where the circularity of the pond responds to the verticality of the trees in the background.
This abundance of flowers and leaves is coupled with the multiplication of touches of color, where red and green dominate.
No human presence animates this pond, giving this landscape a mysterious presence.
Martin thus recalls his period as a symbolist decorator at the end of the 19th century and invests this garden view with great sensuality: according to a synesthesia dear to Charles Baudelaire in his poem "Correspondances" (Les Fleurs du Mal, 1857), the smells of the flowers seem to respond to the movement of the leaves of the trees."