It is not, strictly speaking, a common perception of the three artists that has led us, more than sixty years after their disappearance, to convene together René Seyssaud, Louis Mathieu Verdilhan and Auguste Chabaud.

Seyssaud is the oldest of them: eight years separate his birth from Verdilhan's, while Chabaud is fifteen years younger. They did not meet at the time when, as young rapins, they were testing their vocation in the studio or on the spot. It was only afterwards that they got to know each other's work and appreciated it.
A generation apart, Chabaud, like Seyssaud, followed the teaching of Pierre Grivolas at the Ecole des Beaux-Arts in Avignon.
Perhaps a few months apart, Chabaud and Verdilhan were in Paris at the same time, but probably not in the same neighborhoods...
Each one followed his own way, according to his deep inspirations, hearing at least, from far and wide, about the two other Provençals.
Chabaud and Seyssaud had certainly become friends, and sometimes painted together, the same motif, but it was in a common exaltation which did not exclude that one and the other preserve on the canvas their well tempered character.

That Verdilhan paints apple trees or almond trees in bloom in an opulent paste, and we perceive, in filigree, the fruit trees of Saint Chamas in spring, which inspired Seyssaud all his life.
When Chabaud, in his Parisian period, throws these pure and circled colors in our faces, we immediately think of Verdilhan who, a few years later, will begin to flatten his surfaces, to enclose his colored acids with a black line.

However, we have not sought, through this exhibition, to track down similarities, nor to unravel the influences that these works may have had on each other. What interests us more is the way in which each of these three artists, while deeply rooting their work in the Provencal soil, has approached a form of personal expression that is completely innovative, and, in a word: modern.

Modern, they are all three in a skillful and singular language, breathed by a permanent experimentation of the color and the form. Prodigious, brilliant colorists, they gave life to abundant universes which resemble them.
On the canvas, Seyssaud triturates the matter as Monticelli before him, and brings a vision of the nature of a rustic poetry, prolonging in a very personal way the lesson of the Provençal landscape artists.
As for Verdilhan, in his short existence, he managed to elaborate a formal expression where the quintessence of the motif, the proven goal of his quest, clashes with the fragility of its outcome, leaving only an apparent ease of execution where the artist had thrown all his strength, the investigations of a whole life.
Chabaud gives birth to a complex and prolific work, both graphic and pictorial, with a bulimia that is only equalled by his spontaneity. His relationship with Provence is more than complex: she appears as a castrating muse, who seems to dominate the artist with a virtuous screed and to contain his most remarkable outbursts, while entrusting to his brushes the contrasted depth of his secular soul.

Provençal as they breathe, our three artists transcend however the particularity of the soil which nourishes their work to touch the universal. With their feet firmly planted in the southern soil, they look towards the horizon. All three of them have not deprived themselves of maintaining links, close or not, with the capital. The contribution of their research goes far beyond the regional borders.

The Bernheim-Jeune gallery, of which Félix Fénéon was for a long time the influential collaborator, was not mistaken: works of Seyssaud appeared there in 1907, others of Verdihan in 1909, of Chabaud in 1912.

More than a hundred works by the three painters have been selected for this exhibition, in great diversity. However, they are all part of the same spirit: that of pictorial modernity, which, at the beginning of the 20th century, also blew over Provence and its artists. 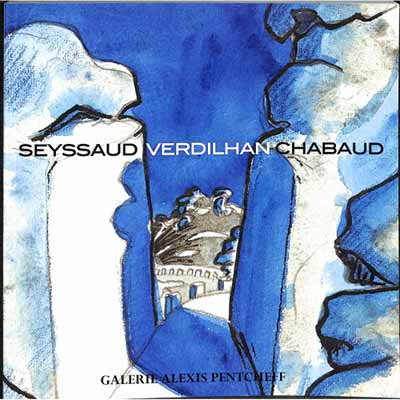