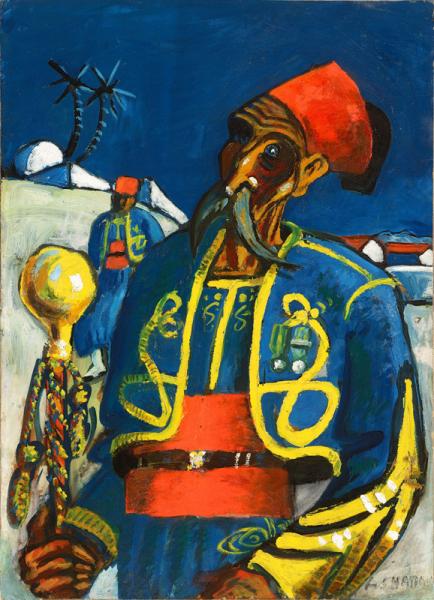 "There is the series of souvenirs from Africa.
Le Tambour-Major des tirailleurs, for example. A smoky face, synthetic as much as a Negro mask, with its lyrical mustache, its forehead furrowed with wrinkles, as if by a ploughshare, its look frightening with superbness and vitality. The gold of the martial trimmings and the gold of the pommel of the cane. The blue, the red, the yellow of the uniform. The mass of the village with its white fort and the green of the palm trees, in exact counterweight with the mass of the main character, gigantic by the effect of antithesis obtained thanks to the opposition with, in the second plan, a measured silhouette, of soldier. It flames and shines in the glory of a light where the azure of the sky is equivalent to lapis lazuli and the sand to vermeil. It goes beyond, on all sides, the anecdote and the thing seen, to reach the great plastic creation, to the summit of the epic and the symbol."
Maximilien Gauthier
Extract from the book A. Chabaud, Editions Les Gémeaux, Paris, 1952

Chabaud has kept from his childhood a marvelous admiration for costumes and uniforms. His work continually translates it, whether in Paris, Tunisia or Provence. The military pomp and circumstance particularly fascinates him. It was with the hope of wearing the colorful costume of the spahi that he joined the colonial artillery. Almost excluding the martial dimension of these icons, Chabaud focuses his attention on the detail of the clothing, the gleam of the embroidery, the association of colors.

As for the spahis and zouaves who pass through Paris, they have a good time in cafés, meeting houses, at the new Magic City amusement park. Chabaud presents the spahis in these moments of relaxation, while they have kept their uniforms, improbable appearance of the bloomers, the blue embroidered vest and the rigid red chechia in the modern Western city. "The spahis, it is not militarism, it is art. Thus they will enter the pantheon of figures dear to the artist.

Back in Graveson, the artist will find other opportunities to be enthusiastic about the costumes. Village life, civil or religious, provided him with colorful archetypes. Arlesian women, shepherds, nuns and priests are invited on the canvas,
recreating these hours of the rural life.
The free race and the bullfight, traditional of his region of origin, still provide the artist with the spectacle of exuberant characters, whose clothing appearance translates this time the passion of the discipline, the adhesion to the cult of the bull, this profane and popular cult, codified like a liturgy and which takes place in the secular arena.