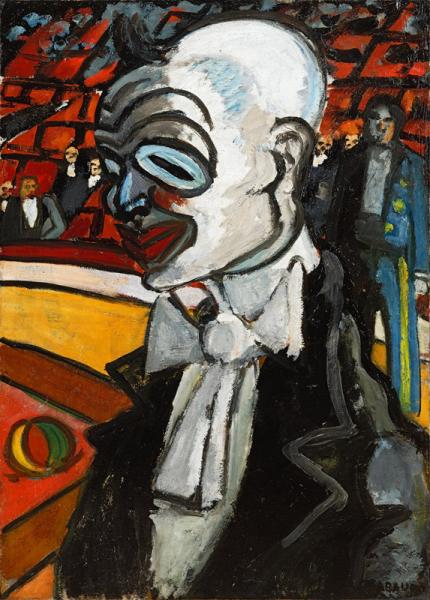 The Clown at Medrano by Auguste Chabaud

This Clown at Medrano by Auguste Chabaud is an emblematic work from the artist's "Parisian period", between the end of 1906 and the beginning of the First World War, during which he alternated between stays in the capital and returns to Provence.
During this period, he developed a work that can be described as avant-garde and experimental, both from a formal and chromatic point of view.

Here, the framing is especially striking, with the emergence of a grotesque and extravagant character, set against the background of a theater where a few men are facing us in their red seats. The yellow band that suggests the circular ring, the triangle and the balloon in the foreground on the left: these geometrical flat areas and strong colors structure and reinforce the strength of this composition.

The Medrano Circus, which Chabaud frequented at the beginning of the century, was indeed famous for its clowns. It replaced the Fernando circus and its horsewomen in Montmartre, rue des Martyrs, which Toulouse-Lautrec and Seurat had painted around 1890. Many clowns made their debut at Medrano at the beginning of the century, which also saw the art of clowning evolve into increasingly elaborate acts.
Grock in particular, an august clown of Swiss origin who performed there, was much appreciated by the public for his musical numbers. As well as Foottit, who will soon form an outstanding duo with Chocolat. Is it one of these two stars of his time that Chabaud represents here? Foottit perhaps, with his shaved head and his tuft of hair on the front of his head...

This figure of the clown also reveals the artist's fascination for the costumes and uniforms that make up, strictly speaking, the characters. The artist, a bit provocative, will admit that he volunteered in the army because he was sensitive not to the prestige but to the plastic beauty of the uniform. He will paint with delight sailors, bright spahis, captains, Senegalese soldiers ...
This obsession will not leave him and Chabaud, once back in Provence, will continue to find the motives of this pictorial mania among the nuns, the old village women who wear the traditional costume or even in the framework of the bullfight, which proposes several archetypes of colorful characters.  The circus was of course one of the privileged places where it was customary to dress up: to wear costumes and even make-up. Chabaud, in Paris, liked to go there, watching tamers, acrobats and clowns on the ring.